The Shroud of Turin
Proposal for non-destructive measurements

The carbon-14 (C14) dating of the Shroud of Turin gave results which have received much criticism in the last few years. Without casting doubt on the honesty of the laboratories, it is possible to criticize their final published results for the following reasons :

Signs of non-uniform C14 distribution: is there a "radioactive image" hidden in the linen?

The available measurements exhibit a variable C14/C12 ratio over a few centimeters. This is not necessarily due to some experimental errors, as the laboratories suggest: it seems to point out that the Shroud exhibits a non-uniform C14 map. Instead of studying this possibility, the three laboratories spoke only in terms of dates. Because of the discrepancies, they seem to have widened the estimated error for the Tucson laboratory. The same happened to the confidence interval statistically measured by the 5% Significance Level (S.L.). Why should we accept such a low S.L.? R. Van Haelst redid the calculations and estimated that the S.L. is actually equal to 1.3%, which definitely gives an unacceptable dating. (See also Nature, 337, feb.1989, pp. 611-615):

Back to the historical page

The most plausible and logical interpretation is that the three samples did not exhibit the same C14/C12 ratio, as pointed out by R. Van Haelst. One may then reject the given measurements as those of non-representative samples of the Shroud. It is necessary then to take better samples. But one may also consider that the amount of C14 is not uniformly distributed over the surface of the linen. Such divergent measurements on samples taken out of a 7 cm² area, let us suggest that there may be wider variations for distant samples.

Besides, two non-official measurements made in 1980, corroborate this last hypothesis. The three 1988 samples were practically taken off in the same zone, a corner of the linen (see fig. 1: sample A was delivered to Tucson Arizona, B to Zurich, C to Oxford). 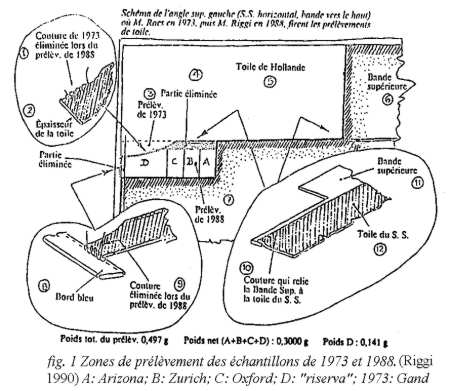 Sampling in various places would have been preferable, and would have shown better the type of spatial C14 distribution over the linen. But in addition to those official samples for dating, there was also the 1973 sample, given for textile analysis to Prof. Raes, at University of Gent (Belgium). In 1979, one of the pioneers of the new AMS technology, Prof. Gove (University of Rochester) and his colleague Harbottle, were allowed to conduct two dating measurements of this sample: the two results diverge greatly, not only between them (1750 and 950 years B.P. - Before Present), but also with the later official measurements of 1988. M.C. van Oosterwyck graphed the 5 dating results (Le sel de la terre, n°20, 1997, pp. 32-54; reproduced in figure 2), showing evidence of some radioactive shifting between internal parts and the border of the Shroud. Most of the scientists rejected the measurements made in 1979-1980 by Gove and Harbottle (published by Sox, H. David, The Image on the Shroud. Unwin, London, 1981, 161-167) because they were not sufficiently reliable. They argued that the 1973 samples were not cut off in presence of Prof. Raes, may have been contaminated or even substituted (see Meacham, 1986). This late assertion seems quite improbable to me: Prof. Raes received the sample only for textile analysis and kept it in what looked like a scrapbook for postage stamps. Moreover, and it is noteworthy, if there had been contamination, the dating measurements of the linen samples should have looked younger (i.e. an age lower than 750 years), but we observe two measurements giving 950 and 1750 years! Furthermore, J.B. Rinaudo carried out an interesting experiment: an old mummy linen 3400 BC, was irradiated for 20 minutes by a neutron flux in the Orphée nuclear reactor (Saclay, France), and was dated to a "virtual" age of 46000 years in the future, simply because its C14/C12 ratio has been multiplied by 570. In addition, the linen appears superficially browned like the visible image of the crucified man on the Shroud.

Besides there are some paintings of the Christ's Shroud very similar to the Shroud of Turin, which clearly predate the results published by the laboratories. One example is the Pray Codex (click here to see a facsimile) found in Budapest, authenticated to at least 1192 and probably painted around the year 1150. It represents the burial of Christ and the announcement by an angel of his resurrection. Many striking similarities with the Shroud of Turin are visible: the crossed hands of Christ are hiding the thumbs (four finger hands); there is no sign of feet on the face image of Jesus' body; the miniature linen exhibits "L" shaped holes, which can be seen on four places of the Turin Shroud; the face image of the linen shows a Z frame comparable to the 3 to 1 weave of the Shroud; and the back image shows little crosses which roughly resemble the crossed flagellation marks on the shoulders and the back of the crucified man of Turin. All those anomalies with respect to the dating of 1988, need to be addressed.

If the carbon-14 is not uniformly distributed, it is impossible to date the Shroud by the C14 method. In retrospect, it was of the greatest importance to determine the homogeneity of the C14 percentage over the Shroud surface, especially after the strange measurements made in 1980. A pollution of the linen may explain such a variation, but the specialists are confident in the ultrasonic cleaning procedure and the microscopic screening used which guarantee its cleanliness. In the second part of this article, I will propose some techniques to map the Shroud's radioactivity ( see also my article published in italian and Dutch: Dalleur, Ph., Sindone di Torino: Tests non-distruttivi? Collegamento pro Sindone, 1995 July/August, pp. 19-27; De Lijkwade van Turijn : Dateringsproeven mogelijk zonder schending van het linnen?, Soudarion, Brugge, 7, nr.3, dec. 1994, pp. 8-10 : Click here to get a french version of the article). The five divergent measurements presently available (the three official ones of 1988 and the two non-official ones of 1980 made on the sample of 1973), which tell in favor of this hypothesis, cannot settle the question, because of the unfortunate nearness of the chosen sampling zones. The mysterious complexion of the Shroud's image formation (which appears as a superficial scorching more or less browned) demands more caution with respect to the choice of the sampling zone for dating. It would have been better to select different spots in order to be able to differentiate the C14 amount within several zones (body picture, bloodstains, peripheral zones, front and back of the linen, etc.)

A complete isotopic analysis would have been preferable

The absence of isotopic analysis is regrettable. Why did we limit measurements to the amount of C12, C13 and C14? As we are not able to explain the formation of the image, the isotopic content, particularly the radioactive elements, would give us some valuable information on the linen composition and the various influences it was subject to. A complete isotopic analysis may also lead to an indirect dating in case of C14 enrichment by some unknown process, as studied by Lindner and Rinaudo.

Nevertheless, the experiments to be done would have to preserve maximally the Shroud's physical integrity, as it is a special relic for a lot of believers. The experiments to determine isotopic content are unfortunately destructive. Therefore, they would have to be restricted to a minimum if we do not want to destroy the shroud little by little. The other methods I present here are not destructive and are virtually infinitely reproducible.

In order to evaluate the time to scan the radioactive map by counting radioactive events, I assumed that the Shroud's radioactivity is only due to C14. It may not be so: an enrichment of radioactive elements should reduce this estimated time. Nevertheless, rough evaluation of maximal time to get a picture is possible: it amounts to several weeks. (See Appendix 1).

Contacting several specialists, I received divided opinions over the technical feasibility of this kind of measurement. The radioactivity which needs to be measured is of the same order of magnitude as the natural radioactivity (I insist that it can also actually be higher). Some scientists assert that the present measurements of ambient radioactivity are sufficiently accurate: they perfectly estimate variations of background radioactivity: but nothing more is asked for the proposed measurements, which do not have to be accurate, but only sensitive enough. The measurement is more relative than absolute. It is comparable to neutron activated autoradiography used with paintings. The question is certainly not to irradiate the Shroud, neither to date it by counting measurements, but to measure grosso modo the distribution of its "natural radioactivity". The longer the time of measurement, the more accurate will be the radioactive map. Besides, there are some methods to filter out the spurious background measurements. Among the various technically possible methods I suggest:

Notice that if some "Kouznetsov effect" took place in the past, the amount of transferred C14 or C13 ions was probably greater in the fire-exposed face of the folded Shroud and in the zone near the silver frame than in the protected zones. This should lead to a differential "stair-level" effect which might be seen with the techniques I propose here (experiments 2 and 3).

In any case, reducing the noisy background radioactive influence in the measurements would be valuable, and perhaps necessary, to detect any variation of radioactivity. There exist several techniques to perform the filtering:

It would be convenient to constitute a scientific committee to determine experimental ways and steps to follow before transmitting them to the Vatican, or to the official Custodian (at present Cardinal Saldarini), in order to launch new experiments. The steps I propose are the following:

a) To begin, try cheap techniques:

b) In the case of positive results, go on with elaborate experiments (ultra sensitive shielded scanner, with filters and digital processing, statistical analysis of correlation with the visible image).

Facsimile of the Pray Codex, conserved at Budapest, dated ±1150 (Pray was a Jesuit who lived in the 18th century).

Back to the historical page

One gram of young pure natural carbon gives about 10,5 disintegration's per second. Here are the approximate data for the samples of 1988 :

Following this calculation, one C14 atom splits every 154 seconds per cm² of new linen. The rate of disintegration of C14 in a linen of 700 years will be one atom in 167 sec [~ 154 (sec) x 2(700/5760)]. The use of a correcting curve ( Stuiver-Pearson or Suess) would give results of the same order of magnitude. In the approximate calculation done here, we can evaluate a time of experiment of several weeks at least.

(Back to link to Appendix 1)

Among the modern autoradiographic techniques, the MSA-MWPC (MultiStep Avalanche - MultiWire Proportional Chamber), used since 1985 in electrophoresis and chromatography, can give a radiographic map (e.g. for DNA sequencing) using radioactive ß-tracers like C14, P32, S35, H3, etc. Its sensitivity is excellent (1000 times higher then the film technique), and its spatial resolution is better than 1 mm. Films must remain in contact with the sample several weeks or even months. With this new technique, a few hours are enough (Cf. Webb, S., The physics of Medical Imaging, in Medical Science Series, 1990, pp. 171-181, 309-318). The measurements on the Shroud should be performed with a sensitive autoradiographic detector in the low energy band (50 to 500 KeV) shielded maximally against spurious sources of radioactivity.

(Back to link to Appendix 2)

The http://www.shroud.com site links you to a lot of information about the Holy Shroud. You can also go to the italian site http://sindone.torino.chiesacattolica.it. A Newsgroup is accessible at news:alt.turin-shroud.

Back to historical page